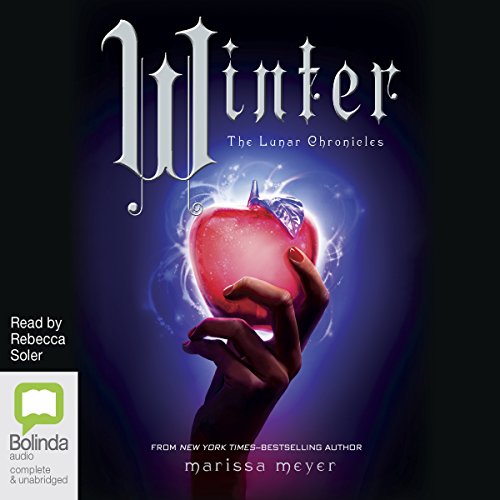 Synopsis:
Princess Winter is admired by the Lunar people for her grace and kindness, and despite the scars that mar her face, her beauty is said to be even more breathtaking than that of her stepmother, Queen Levana.

Winter despises her stepmother, and knows Levana won’t approve of her feelings for her childhood friend—the handsome palace guard, Jacin. But Winter isn’t as weak as Levana believes her to be and she’s been undermining her stepmother’s wishes for years. Together with the cyborg mechanic, Cinder, and her allies, Winter might even have the power to launch a revolution and win a war that’s been raging for far too long.

Can Cinder, Scarlet, Cress, and Winter defeat Levana and find their happily ever afters?

The audiobook was a beast of a book over 23 hours long but I was addicted. I finished listening to this in 5 days. I have no idea how. I full on expected for it to take a month to finish since it was so long. I found myself unable to stop listening and picking it up at any chance I could.

I didn’t lose interest at all. I was engaged constantly, on the edge of my seat and I laughed out loud (in public) to many parts. It was overall one of the most entertaining books (and series) I’ve ever read.

Characters:
Cinder: Still love Cinder. She’s such a great main character. I have loved her from book one and I have thoroughly enjoyed watching her character grow and develop.

Kai: He’s still adorable.
I love how far he’s willing to go for his country. He’s such an honourable leader and a genuine sweetheart. I LOVE HIM + CINDER!

Aiko: She is also still freaking adorable. Someone get this girl a droid boyfriend!

Scarlet: She’s cool. I like her, she’s not my favourite but I was still invested in her story/happiness/relationships.

Cress: I LOVE CRESS. She’s one of my faves. I love her relationship with Thorne. I am absolute trash for Thorne + Cress. She’s smart, quirky and relatable.

Thorne: As I’ve said in my previous review(s), I freaking adore Thorne. He’s so funny and cocky. But also a lil cinnamon roll.

Winter: Winter is a bit odd. For reasons explained in the book so, I won’t spoil! She’s quirky and nice but a bit childlike, I guess? I did find her a little irritating/trying at times but she’s overall not a bad character and her story is pretty interesting.