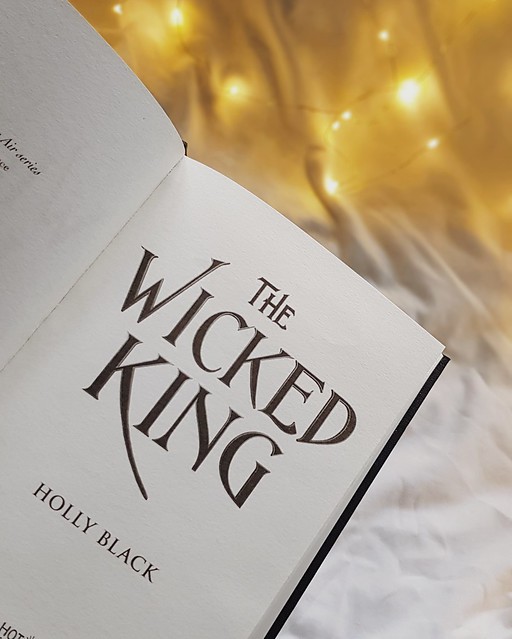 Hey guys!
It has been ages, I know! This month has been bad for me healthwise + reading-wise. So not a lot to post about. I haven’t been blogging consistently due to having flu and uni work. Hopefully, now I can get back into the swing of it!

The first lesson is to make yourself strong.

After the jaw-dropping revelation that Oak is the heir to Faerie, Jude must keep her younger brother safe. To do so, she has bound the wicked king, Cardan, to her, and made herself the power behind the throne. Navigating the constantly shifting political alliances of Faerie would be difficult enough if Cardan were easy to control. But he does everything in his power to humiliate and undermine her even as his fascination with her remains undiminished.

When it becomes all too clear that someone close to Jude means to betray her, threatening her own life and the lives of everyone she loves, Jude must uncover the traitor and fight her own complicated feelings for Cardan to maintain control as a mortal in a Faerie world.

Plot:
Ok so, I didn’t reread The Cruel Prince and it had been an age since I’d read it when this came. However, I decided I wasn’t going to reread and jump straight into this. I don’t regret not rereading, I think if I did reread The Cruel Prince, I wouldn’t rate it as high as when I first read it. It was pretty unmemorable and I had to read a recap before starting The Wicked King.

As for The Wicked King, plot-wise??? I feel like nothing exciting or interesting happened? Everyone was raving and screaming over how amazing this whole book was and throughout the entirety of it. I don’t feel like there was much of a plot, it’s literally just Jude running court. It wasn’t overly fun to read about, it was just ok. Through all of it I was like meh?? When is it going to get good? – Answer: the last 100 pages.

I didn’t find it hard to read, it wasn’t something I kept reaching for though. I wasn’t gripped or invested. It was just okay. In my opinion: this book was way overhyped. Which is why I was left disappointed. My expectations were too high and ultimately it failed.

Characters:
Jude: She was okay, nothing remarkable, nothing terrible. I find Jude fairly likeable and I do like reading from her perspective. That being said, she’s so average that she’s unmemorable. Kinda like the whole book + series.

Cardan: He was less of an ass in this one and more likeable. There wasn’t much Jude/Cardan romantic-relationship wise, I don’t know why everyone was screaming. Again, he’s unmemorable.