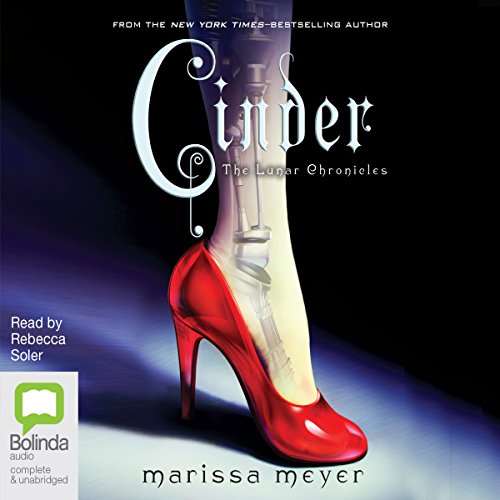 “Even in the Future, the Story Begins with Once Upon a Time.”

CINDER, a gifted mechanic in New Beijing, is also a cyborg. She’s reviled by her stepmother and blamed for her stepsister’s sudden illness. But when her life becomes entwined with the handsome Prince Kai’s, she finds herself at the centre of a violent struggle between the desires of an evil queen – and a dangerous temptation.

Cinder is caught between duty and freedom, loyalty and betrayal. Now she must uncover secrets about her mysterious past in order to protect Earth’s future.

This is not the fairytale you remember. But it’s one you won’t forget.

Plot:
I had no idea what to expect from this plot. A Cinderella Sci-fi/Fantasy retelling? I didn’t even know if it would work but it did! So well! The plot was interesting, there was nothing overly mind-blowing about it but it was very much enjoyable. As with most YA, the plot twists are pretty predictable. I guess the ‘big’ plot twist early on, however, this didn’t take away from my enjoyment of the story, thankfully. The ending was really good, it was well paced and gripping but ended on a bloody cliffhanger! Definitely left me wanting more.

I really enjoyed the world, it was so interesting to get to know (and I really want to see more) I really like futuristic sci-fi, this book makes me want to read more sci-fi.
In terms of worldbuilding, it could’ve been expanded but there was enough to make me interested. Enough glimpses that I now want to know more, which is always good.

Overall, though not a 100% original, mindblowing book, Cinder, was such a joy. It was fun. Sometimes you don’t need a book to blow your mind or make you question your life. You just need a bit of fun. I’ve been in a slump lately and this was just the pick-me-up I needed.
Characters:
Cinder: I really enjoyed Cinder as the main character! She was interesting, her story was cool. I like that there’s a lot of mystery behind the character, it added intrigue. The whole cyborg-Cinderella character is such a cool twist on the original. It’s nice to have a non-human main character for a change. There are prejudices/struggles with being cyborg which is a fascinating concept.

Kai: I was under the impression the story would be told just by Cinder, so Kai was a nice surprise. I enjoyed his perspective, seeing the world from his point of view and seeing Cinder from someone else’s view was a nice touch. Also, I love the little friendship thing he and Cinder have, so cute!

Narrator: At first, I didn’t think I was going to enjoy the narrator of this audiobook. I didn’t take to her voice at first but as time went on I find it fine. It wasn’t the best narrator ever but it wasn’t too bad. (Except for a really questionable Aussie accent the narrator did at one point, it was quite cringy)