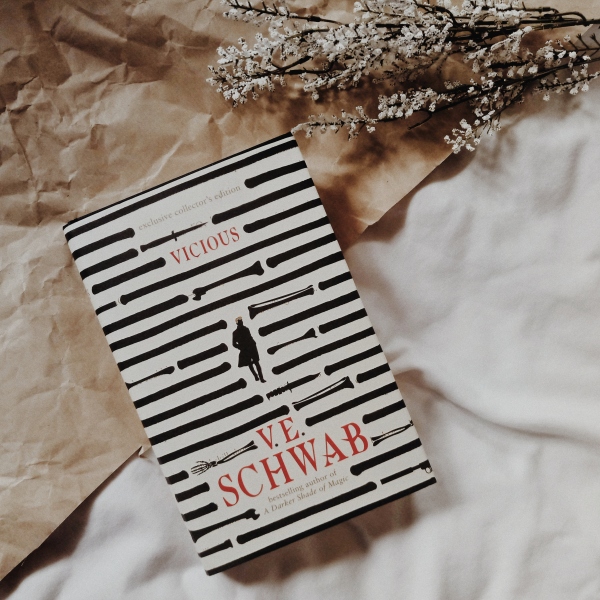 “When no one understands, that’s usually a good sign that you’re wrong.”
― Victoria Schwab, Vicious

Synopsis:
Victor and Eli started out as college roommates—brilliant, arrogant, lonely boys who recognized the same sharpness and ambition in each other. In their senior year, a shared research interest in adrenaline, near-death experiences, and seemingly supernatural events reveals an intriguing possibility: that under the right conditions, someone could develop extraordinary abilities. But when their thesis moves from the academic to the experimental, things go horribly wrong.

Ten years later, Victor breaks out of prison, determined to catch up to his old friend (now foe), aided by a young girl whose reserved nature obscures a stunning ability. Meanwhile, Eli is on a mission to eradicate every other super-powered person that he can find—aside from his sidekick, an enigmatic woman with an unbreakable will. Armed with terrible power on both sides, driven by the memory of betrayal and loss, the archnemeses have set a course for revenge—but who will be left alive at the end?

I am super late to the V.E. Schwab bandwagon, this is my first book by her and I was not disappointed!

Plot:
The plot is slow but interesting, it wouldn’t be my usual type of book. I usually go for more fast paced, action packed books, however, this was really intriguing.
The story jumps back and forth past and present, with various characters, in the past, Eli and Victor are roommates working on their thesis, Eli’s being on EO (ExtraOrdinaries). Eli believes EO’s are real and wants to figure out how. Victor steps in due to being jealous of Eli and wanting some of the credit.
Flash forward to the present, Victor wants revenge on Eli, so we know something bad happens between them.

V.E. Schwab’s writing was so compelling and intriguing, I just had to keep reading to know what happened between Eli and Victor and obviously, how Victor was going to get revenge. I loved the characters, I love the little trio that formed between Victor, Mitch and Sydney.

This book is basically X-Men, serious Charles/Eric (Prof X/Magneto) vibes – which I absolutely love. If you’re a fan of villains + X-men, go ahead and pick this up because you will love it!

Characters:
Victor: I loved Victor as the main character! He was so interesting and complex, I instantly took to him and I loved reading from his perspective. His friendship with Eli was cool, to begin with, but their rivalry was much more interesting.

Eli: I didn’t mind Eli, at first. Something always felt a bit off with him, I didn’t take to him as easily as I did with Victor. I definitely didn’t expect him to be such an arse,

Mitch: I thought Mitch was a cool side character, I love the friendship/partnership between him and Victor. I also love the little team him, Victor and Sydney make.