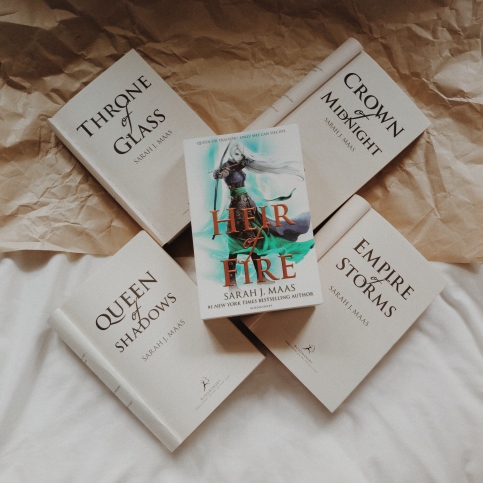 Synopsis:
She was the heir of ash and fire, and she would bow to no one.

Celaena Sardothien has survived deadly contests and shattering heartbreak—but at an unspeakable cost. Now she must travel to a new land to confront her darkest truth…a truth about her heritage that could change her life—and her future—forever.

Meanwhile, brutal and monstrous forces are gathering on the horizon, intent on enslaving her world. To defeat them, Celaena must find the strength to not only fight her inner demons but to battle the evil that is about to be unleashed.

Plot:
Okay, so. This was probably the most disappointing reread, it was so slow. I don’t remember this book being to slow and boring the first time I read it. It was so hard to get into and it took me so long to read, which is not like me with SJM’s books.
The first 200 pages were so painful to get through, the majority of the book felt like filler and definitely needed cutting down. I am all for big books but this just had too much of nothing. I kept putting down this book, I felt really unmotivated and disinterested, which made me not want to read on.

It didn’t help that this book introduced new characters, who I didn’t like the first time around and certainly didn’t like this time either.
The last 200 pages were the best part of the story, it had better pacing and more going on than the majority of the rest of the book. The ending was so much more enjoyable and that’s when I found myself gripped the most. I am actually shocked by my dislike of 50% or more of this book. I even changed my rating because I was that disappointed.

Characters:
Celaena: I get that this book was about Celaena finding herself and training to use and control her powers and being able to shift but it was boring. She wasn’t as exciting or interesting in this book, maybe it’s just me but I couldn’t get into her story in this one.

Manon: Unpopular opinion: Manon is OVERRATED! I have literally never been able to figure out what everyone loves about Manon. She’s horrible and not in an entertaining, fun way. She’s just crap. I don’t like her. I like Abraxos though, which makes her chapters more bearable.

Dorian: As I keep saying; I love him. His character development is great, he’s such a genuinely good person and I am so sad for him after this book. His chapters were the most enjoyable in this book.

Chaol: As much as I don’t like Chaol, his friendship and love for Dorian is great. They have a great bromance. Even though they’re struggling with their friendship it is so nice to see Chaol doing whatever he can to help Dorian.

Rowan: He starts off as an intolerable asshole, for about 50% of the book I hated him. He does start to get better throughout the book and eventually realises what Celaena has been through and understands her better and vice versa.

Rating: 3 Stars – Knocked off a Star from my previous rating.